What is a reverse current protection circuit? 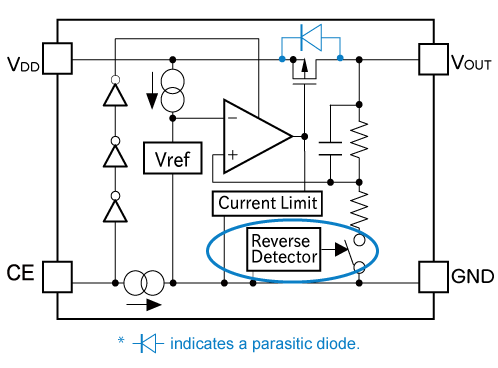 Usually, the LDO regulator using Pch output transistor contains a parasitic diode between VDD pin and VOUT pin.
Therefore, if VOUT is higher than VIN, the parasitic diode conducts in forward direction.
As a result, the current flows from VOUT pin to VDD pin.

RP173 Series switches to the reverse current protection mode before VIN becomes lower than VOUT by connecting the parasitic diode of Pch output transistor to the backward direction, and connecting the gate to VOUT pin.
As a result, the Pch output transistor is turned off and the current path from VOUT pin to GND pin is disconnected. (Except RP115)

When using a LDO regulator including the Reverse Current Protection Circuit such as RP173, the protection diode is not needed as shown in the next page right figure. Therefore, it can prevent the voltage drop and the leakage current.