In recent years, the number of applications using Li-Ion batteries has increased significantly. Initially, single cell batteries were used in mobile phone applications but nowadays they are used in almost any kind of portable device.
Nisshinbo Micro Devices has always been a pioneer in developing Li-Ion protection ICs and production already started around 1995. So far, smartphones were considered as one of the smallest or thinnest devices using Li-Ion batteries but this situation changed in the last years with the introduction of rechargeable smart watches, hearing aid instruments and fitness trackers. As a result, the required battery capacity shrinked from a 3000mAh for smart phones to around 50mAh for these so-called wearable devices. Such applications have new challenging requirements for its internal components, like ultra-small package size, low current consumption in on and standby mode but also sophisticated safety circuits.

The new R5441 and R5443 were especially designed for this purpose and both products are embedded in a wafer level chip scaled package (WLCSP) to minimize board space. The R5443 is the smallest version and requires a board space area of only 1.05mm2 and has a thickness of 0.36mm. It is considered as one of the smallest single cell Li-Ion protection ICs available today. Around 53% smaller compared to the popular protection ICs in a 1.4 x 1.4mm DFN package.

Li-Ion batteries are safe in general when used according to the specifications but can become a potential hazard in case of an internal or mechanical failure. Overheating, emitting fumes or even worse can be the result and also the manufacturer’s reputation can become seriously harmed when a disaster strikes. The Li-Ion battery protection IC monitors the charge and discharge process and intervenes as soon as the process is at risk of going beyond the safe operation range of the battery cell. The protection ICs can be used on the application’s circuit board when used with a bare battery cell but also can be integrated in a laminated battery pack. In particular the rechargeable Li-Ion batteries have strict operation limits to keep the battery cell in optimal condition and to prevent a critical situation when overloaded. The R5441 and R5443 include several detection circuits and their outputs control two external MOSFETs that are connected in series with the battery wiring. 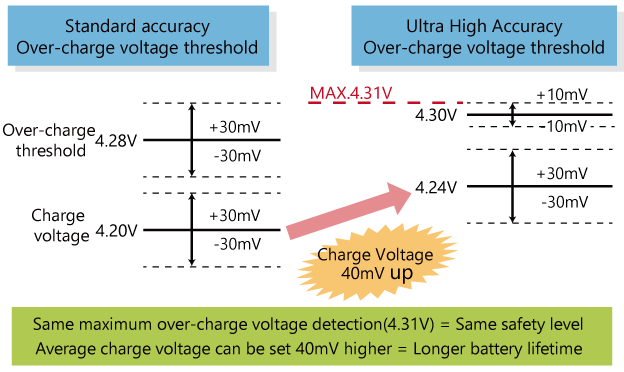 Both the R5441 and R5443 have an improved over-charge voltage threshold accuracy of ±10mV versus ±30mV for regular products. The idea behind this feature is to increase the charge voltage whilst maintaining the same safety level. As a result, the battery operation lifetime will increase with 40mV that is important for applications with a small battery capacity. The image shows more details and compares a standard versus an improved accuracy level.

Traditionally one makes use of the MOSFET on-resistance in order to measure the current flow of the battery pack. However, the on-resistance level is most inaccurate as it depends on various criteria such as ambient temperature, gate voltage and MOSFET type. 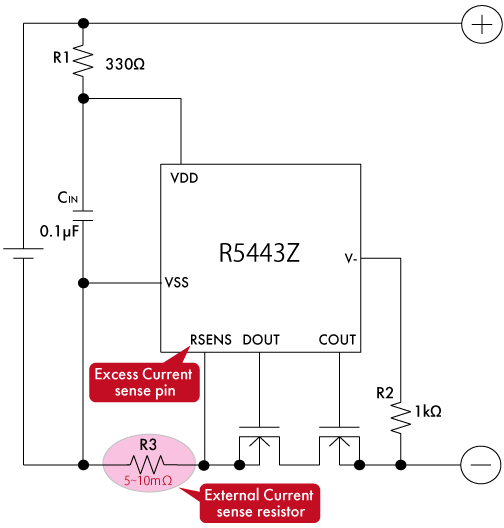 Design engineers may often guess at what over-current level the protection IC will trigger its over-current protection. As for a higher standard of current sensing, it is becoming more common nowadays to make use of an external current sense resistor. Such resistor is available on the market and can be ordered with your preferred resistance value and accuracy level.

The great advantage of using this method is that the over-current threshold margin improves significantly in comparison to MOSFET current sense.

Optional latch and auto-release functions for the over-charge and over-discharge monitoring circuits are available. A latch function keeps the charge or discharge process interrupted until a charger is disconnected or connected. The auto-release function releases the interruption when the release threshold is exceeded.
Circuit delay times are all internally fixed and do not need any external components. By selecting a particular product version one has the possibility to specify the required delay times.

Another option is the 0V battery charge function. It is possible to prevent recharging when the battery voltage decreases below deep discharge threshold (TYP. 1.25V). In such case, the Li-Ion cell may not be in safe status for the next charging process. Refer to the datasheet for more details about optional functions.

Significant detail for the R5441 / R5443 is that the current consumption of the ICs is equal or lower than most other available solutions on the market and contributes reducing the self-discharge rate of the battery pack. In normal operation, the current consumption is respectively 3.5µA and 2.5µA. When the product enters the standby mode, the product consumes only 0.04µA.

The R5441 and R5443 are welcome additions to the market; targeted devices are wearable devices with a small single cell Li-Ion or Li-Polymer battery. Both have a staggering small footprint of respectively 1.39 and 1.05mm2. The products offer a standard and enhanced safety solution with additional circuit for thermal protection to detect an overheated battery pack. Moreover, they have excellent high accuracy threshold settings providing a higher safety level for those applications that are worn on our body. We continue to develop more solutions for this market and we will be back soon with more news.